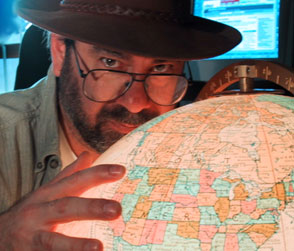 On this week’s episode, hosts Sara, Jessica, & Michelle talk about an IKEA ad in Italy causing outrage, Italian police pocketing coins from the Trevi Fountain, more ancient artifacts discovered in Italy, & a sad update from the Giro d’Italia. Then we speak with travel writer & part-time Tuscany resident James Martin about the food of Tuscany.

James Martin, a Professional Vagabond, lives part time in one of those seldom visited spots in Italy called la Lunigiana, a place in far northern Tuscany along the Via Francigena that sports over 160 castles and some pretty unique cuisine. He likes talking about his odder experiences, which you’ll find in the Wandering Italy Blog. Before becoming a travel writer, James went through several “career” phases: as archaeologist, electrical engineer, and race car driver. He’s obviously unstable as hell, as the worn-heeled traveler should be.

Video of the week:
Ennio Morricone – Once upon a time in the West