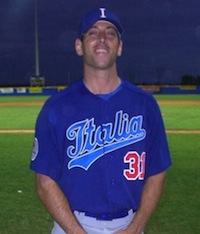 Hosts Sara, Jessica and Michelle talk about Berlusconi losing another minister in his government, Berlusconi turns his attentions to the arts, Gap says Ciao Milano, and we speak with Mark Langone, professional baseball player in Italy about America’s favorite pastime…in Italia.

Mark Langone, @mlango on Twitter, first came to Italy from the Boston area in 2004 to play baseball professionally in Parma, the elegant northern city more known for its prosciutto ham and parmesan cheese than its baseball fields.  What was to be a one-summer experience following graduate school to explore his great grandparents’ birth country one baseball campo at a time, very soon became permanent home, as Mark has just completed his 7th baseball season in the boot.  He now calls Milan home, where he works full-time as a client consultant for Nielsen BASES, a division of The Nielsen Company.  He enjoys visiting small-town Italy, most of all the tiny family birthplace in the mountainous southern Basilicata region, where he has discovered living relatives and walked the exact patch of land from which his great grandparents emigrated to the United States in 1892.